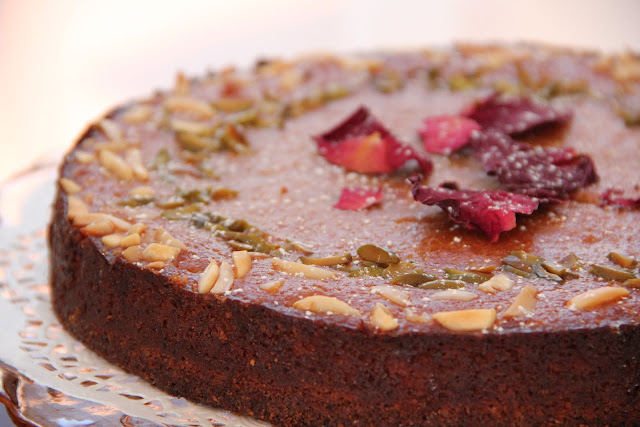 I got to know this cake from My Kitchen Rules (Australian TV show).  I can comfortably say that this is not a cake of Persian origin, and I am not sure whether nutmeg is used in Persian sweets.   The history of Iran's baking is very much like the Indian sweets.  It consisted of sweet breads, fried or cooked sweet nibbles rather than what we associate today's baking with (cakes and baking in an oven).  Of course, now days most Persians claim most of Persian pastries and cakes as their own.  But what we must truly realise is that the traditional Persian sweets were very limited and specific to their regions.

As Iran underwent modernisation, naturally what lacked in the cuisine was adopted from other nation's cuisines.  The heavy influence of the European was not only apparent in the country's social development but also in Iran's bakeries.  These modern bakeries emerged in the prime of Pahlavi's dynasty when foreign ties were at their strongest.  Bakers of that time cleverly adjusted each recipe to suit their own market.  Distinctive Persian flavours were added to European pastries and cakes and suddenly Iran had it's Sweet Revolution! Widely accepted amongst the young and the old and voila! ... Iran's Westernisation of baked sweets swept aside the traditional sweets, and I think I can safely say that the traditional sweets became victims of Westernisation and simply became the "forgotten sweets". 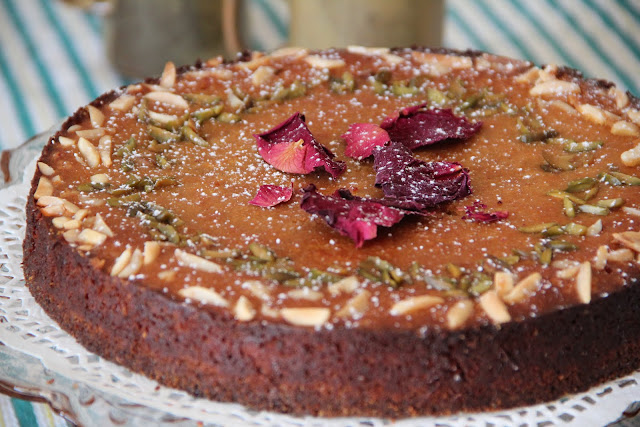 The recipe is from Gourmet Traveller and I left out nutmeg but instead used cardamom, rosewater and dissolved saffron.

Hint: As this is a gluten-free cake, the mix is very sticky therefore, grease the baking tin generously with oil and line it with baking paper.  When turning the cake out of the tin, loosen the sides with a knife first.
Posted by My Persian Feast at 21:43