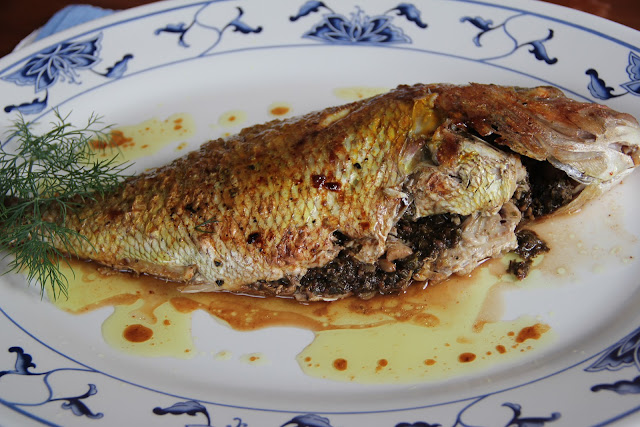 Caspian Sea (دریای خزر Daryā-i Xazar) is the largest lake in the world and it's coastline is shared by Azerbaijan, Iran, Kazakhstan, Russia, and Turkmenistan. The fact that this massive sea is landlocked contributes to it's unique fauna. The Caspian Sea has Sturgeon in great numbers, which yield the most famous and prized sea delicacy; roe (eggs) that are processed into caviar. Apart from Caviar, all the fish from the Caspian Sea is not found elsewhere in the world. Mahi Sefeed (white fish) is the King of all fishes from the Caspian Sea and is not only a traditional New Year's Day meal but it is served any day for a humble family meal.

This dish is full of fragrant native herbs with carefully home cooked pomegranate paste and sun-dried pomegranate seeds. Traditionally, it takes hours and hours to fully cook and for flavours to come together. It is a labour of love with harmony in flavours.

On one occasion, I clearly remember my dear grandmother (Dade-Bajee) making this dish the traditional way. After cleaning the fish, she gathered a few twigs from trees. She carefully placed the small twigs on the bottom of a fry pan while she complained that the twigs weren't to her liking. She poured a little oil in the pan and filled the fish with a special stuffing with native herbs. She then carefully layed the fish on the twigs so that they won't touch the bottom of the pan and later stick to it. The fry pan was closed with a sheet of metal and on top of that hot burning charcoal was placed. The stove was turned on very low. After a good few hours the charcoal was removed and the stove was turned off. There it was, an amazing melt in the mouth heavenly dish.

A few decades has passed since I saw how the same dish was prepared. I have endeavoured to recreate the same dish my Dade-Bajee prepared for me, except I faced two main challenges; one the fish is nowhere to be found, and the time consuming method of cooking with charcoal does not fit into our hectic everyday lives. Perhaps one day, we could go back to the same region and try it with the same fish. Ensha-Allah! 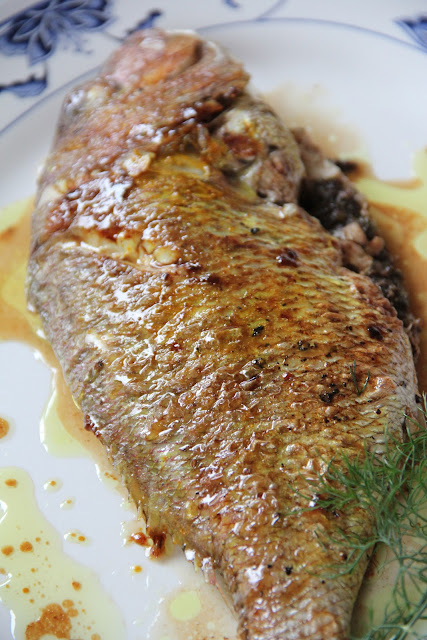